The Joellyn T Duesberry Collection is participating in the Denver Art Showcase from August 1-7, a virtual event offering artwork for purchase. There are 10 of Joly’s paintings in the show, including landscapes of Colorado, Montana, Alaska, and Maine. Please go to this link to see our booth: https://fairs.artandobject.com/…/joellyn-t-duesberry…

Join us for our Annual Studio Tour of Greenwood Village artists creating paintings, monotypes, photography, sculpture and jewelry. Meet the artists, view their studios and practice and enjoy some tapas and wine!

Details to come of artworks available and artists attending.

The Duesberry Collection and studio in Greenwood Village is open to the public for viewing and acquisitions. Contact me to schedule an appointment for private viewing of the collection and studio visit. Brenda LaBier at 757.679.3381 or Brenda@JoellynDuesberry.com

Join the “Women of Steele” and the City of Greenwood Village’s Cultural Arts program for “Art On The Green” an all Colorado art fair. This free event will include 50 artists booths, food trucks and the 37th Annual All Colorado Art Show.

Tickets are going fast! We ask that you reserve a timed ticket with the link below. Walk ups will be welcomed as space becomes available. Please check at the main entrance.


Please use the link below to reserve your free tickets and time slot at Eventbrite
https://www.eventbrite.com/e/art-on-the-green-tickets-115750824833

Please use the link below to review participating artists and safety precautions that have been implemented.
https://www.greenwoodvillage.com/2587/Art-on-the-Green

Joellyn T. Duesberry’s long and distinguished painting career took her around the world.
Inviting the viewer along her journey, A Painter’s Path offers a grand overview of Duesberry’s prolific output traveling the hemispheres and exploring rural planes, exotic land, rock, and water forms. Her landscapes reveal the subjects that continually inspired her to revisit them on the canvas and in person.

Duesberry explored the landscapes of Europe, South America and Africa and upon each return to this country; she painted her cherished East Coast locations. These once familiar places had become alluring yet again and changed her perspective. Each new virgin territory summoned to the surface richer, more personal, and irreducible forms.

Duesberry’s artwork has been acquired by over 90 public collections both nationally and internationally. Available is her 50-year retrospective book, Elevated Perspective: The Paintings of Joellyn Duesberry and Dialogue with the Artist, a 32 minute PBS documentary film on her painting and monotype processes.

Gallery Hours: Monday-Friday, 10am-4pm and prior to scheduled performances
Opening Reception: Saturday, January 18, 6-7:30pm
Join us for an evening of beautiful art, mingling and tasty treats! Celebrate the opening of Joellyn T. Duesberry: A Painter’s Path while noshing on light bites from Lante Brau Casa and perusing the life’s work of one of the most significant landscape painters of the west.
More information: www.lonetreeartscenter.org or 720.509.1000.

Joellyn Duesberry left an indelible impact on many, and we are forever grateful for her legacy as one of Colorado’s leading painters. Joly gifted the University of Denver Art Collections two of her most important paintings for display at the Newman Center for the Performing Arts.

We are excited to announce that the paintings are installed at the Newman Center and ready to be enjoyed by all! Please visit and see these beautiful paintings.

Joy Burns Plaza in the Robert and Judi Newman Center for the Performing Arts at 2344 E Iliff Ave, Denver, CO 80210

Join us for our 5th Annual Studio Tour of Greenwood Village artists. Meet the artists, view their studios and practice and enjoy some tapas and wine!

Works available for purchase include paintings and monotypes by Joellyn Duesberry and additional work by participating artists creating sculpture, photography, jewelry and more.

For private viewing of the collection please contact Brenda LaBier, Director, at Brenda@JoellynDuesberry.com or 757.679.3381

Join us for our 4th Annual Neighborhood Studio Tour of Greenwood Village artists.
Meet the artists, view their studios and practice and enjoy some tapas and wine! 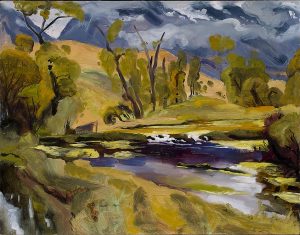 For private viewing of the collection please contact Brenda LaBier at 757.679.3381

A self-taught oil painter, Joellyn T Duesberry’s long and distinguished career took her around the world while establishing herself as a regionalist. Exhibited are both well-known landscapes and rarely seen works that reveal the subjects that continually inspired Duesberry to revisit them on the canvas and in person. Her plein air locales focused on the northeast and western United States, while utilizing the winter months to create monotypes to experiment with abstraction.

An Exploration in Medium, on view at the Curtis Arts Center, Greenwood Village, CO, examines Duesberry’s prolific output from the mid-1970s to 2015 including paintings, monotypes and drawings. Exploring the planes of rural architecture, exotic land, rock, and water forms for the pull of unfamiliar geometries, it became obvious that her consistent choices of color and structure was a response to the world that came from deepest memory. Southwestern desert tans and reds (like Virginia hills) made her at ease with Tuscan, Californian or Spanish bright light, and its sculptural definition of forms; ancient hill towns of Europe presented aspects of the same architectonics, hand-forged irregularities, and the Virginia farmlands and its roofed structures from where she grew up.

“The act of landscape painting is my most natural, challenging, and joyful experience in life. My often-quirky interpretation of Colorado vistas, corners, and waters show the magical energy of the land. The power I sense in wild places, imparts to this artist a vibrating energy and strength, which I must somehow express in every light, mood, odd angle and scale of vision.” Joellyn T Duesberry

Duesberry’s artwork has been acquired by over 90 public collections both nationally and internationally. Available is her 50-year retrospective book entitled “Elevated Perspective: The Paintings of Joellyn Duesberry” and “Dialogue with the Artist” a 32 minute PBS documentary film on her process of painting and monotypes.

Joellyn Toler Duesberry, age 72, died on August 5, 2016 of pancreatic cancer. Born and brought up in Richmond, Va., she matriculated to Smith College, graduating in 1966 with highest honors. En route to her career as a landscape painter, she acquired a master’s degree from the Institute of Fine Arts at New York University. Her interest in landscape began at age 5 while traveling on a train, where she became transfixed by the images passing by her window. Painting followed soon after and never stopped until the spring of 2015.

Living in New York City, her career blossomed. As a Woodrow Wilson scholarship recipient followed by a National Endowment for the Arts grant, she was able to reduce her work as a fine art appraiser and spend a greater amount of time painting. She acquired a second home and studio in Millbrook, NY, which allowed her the chance to translate her love of the land into broad statements of that love through her artistry.

Many exhibitions followed her development as a painter. Her work resides in numerous museums and private collections around the country.

Culled from a private collection in Santa Fe, Modernist Intersections: The Tia Collection, examines the relationships between various artworks made in the 20th century. Sometimes connections are made through the formal elements while other times they are forged through subject matter. Often they are emotional and the intersections are reflected in the mood of the work. At times, it seems as if the works were created in tandem and not decades apart. 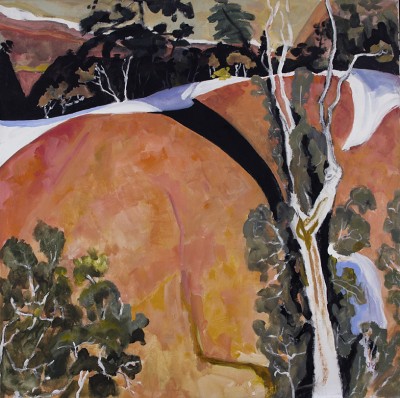 The special thing that happens when these intersections are made is that new insights are born. We begin to question our own assumptions about art. For example, what is Modern Art? What is Western Art? Traditional thought has held these styles can never meet, when in reality they do, and they do often. In particular we discover that art is boundless—it cannot and should not always be confined to the typical art historical categories. We are reminded that art communicates, and the messaging changes depending on what company it is keeping.